Skip to content
You know what I’m talking about, right? Have you ever learned a new word, one that you swear you’ve never heard before, only to find it popping up throughout your daily life for a few days after?

There’s a name for that: The Baader-Meinhof phenomenon.

This phenomenon actually works on two major premises (or psychological processes, if you will): The confirmation and selection bias.

The first of these two, the selection bias. It usually kicks in when we come across something new, something unfamiliar and/or something interesting. From this point on, your brain is actively looking for this, and that’s why you seem to notice it so much more on a day-to-day basis.

The second, the confirmation bias. This is a common statistical error our brain creates, because when it sees these random new words pop up everywhere, it wants to fit it into a rational idea. This feeds off the first process, but in this case, your brain is telling you, ‘it’s new to everyone, and has suddenly popped up.’ This isn’t true, it’s all because you have simply stopped ignoring it. 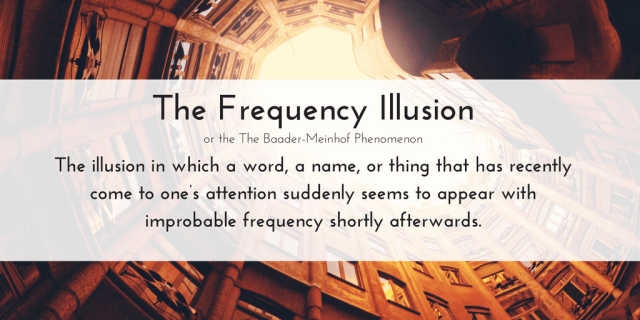 The name Baader-Meinhof phenomenon actually started as a meme in 1994. Since frequency illusion was coined in 2006, people sort of just came up with a term to describe the weird feeling without having the science behind it. According to Pacific Standard:

“Baader-Meinhof phenomenon was invented in 1994 by a commenter on the St. Paul Pioneer Press’ online discussion board, who came up with it after hearing the name of the ultra-left-wing German terrorist group twice in 24 hours. The phrase became a meme on the newspaper’s boards, where it still pops up regularly, and has since spread to the wider Internet.”