Skip to content
I’d like to begin by saying this blog isn’t meant to offend anyone. It’s all for the sake of fun and entertainment, and to satisfy my sadistic desideratum. If you’re easily offended, or if this blog offended you in any way, it’s because it was meant to.

(If that last line offended you, get out right now. It’s going to get much worse.)

It might be worthwhile to address the question of ‘why we laugh’ before dealing with comedy styles such as dark humour.

We believe laughter evolved from the panting behavior of our ancient primate ancestors. Today, if we tickle chimps or gorillas, they don’t laugh “ha ha ha” but exhibit a panting sound. That’s the sound of ape laughter. And it’s the root of human laughter.
Apes laugh in conditions in which human laughter is produced, like tickle, rough and tumble play, and chasing games. Other animals produce vocalizations during play, but they are so different that it’s difficult to equate them with laughter. Rats, for example, produce high-pitch vocalizations during play and when tickled. But it’s very different in sound from human laughter.
When we laugh, we’re often communicating playful intent. So laughter has a bonding function within individuals in a group. It’s often positive, but it can be negative too. There’s a difference between “laughing with” and “laughing at.” People who laugh at others may be trying to force them to conform or casting them out of the group. [1]

Dark humour, like every other comedic form, isn’t everyone’s cup of tea (African people probably don’t even know what that is). Our likes and dislikes in regards to what we find funny are so individualistic that nobody has been able to write down a formula or generalisation and point at something and say “This is objectively funny.” [2] You can read more about laughter and humour in the articles detailed below.

Humor/laughter is a mechanism that we adapted over the span of several millennia, and it’s a technique that allows us to examine a situation and diffuse stress. Dark humour is a style of comedy that deals with morbid, taboo or socially unacceptable topics and pokes fun at them. Plato and Hobbes believed that comedy could only be derived at the expense of someone else’s misfortune or to help us feel superior to others. [1] In most cases, comedy is effective when it hurts a little, and in the case of dark humour, the more it hurts, the better. It’s like food, not everyone gets it.

Dark humour is usually analysed using the ‘Benign Violation theory’, which suggests that humour should fall in the spot between ‘Benign’ and ‘Violation’. The violation, as the name implies, must be benign, but enough to hit a sweet spot. Too lighthearted and you risk being toothless, too offensive and you make your audience uncomfortable. 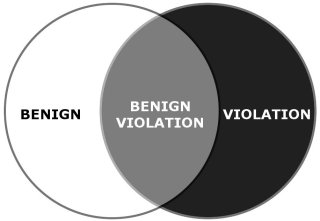 Some studies claim that dark humour is linked to being intelligent and higher IQ (and as a dark humour connoisseur, I can confirm this.) These studies, in actuality, usually make a lot of assumptions and I can’t find much credibility in the way they’re conducted. Most times studies like this only interview a group of people that already have slightly above average IQs, such as students at a university, and because of this false conclusions can arise. I’ve still linked a few of these, read them and see if you find them credible.

Moreover, cartoon characters rarely die or sustain horrific permanent injuries after falling, which provides us with some psychological relief. This is the Relief Theory, which was put forward by Freud. An implication of Relief Theory is that humor acts as a coping mechanism, so it might be a sign of good health to laugh in the face of adversity. Freud said that the “ego insists that it cannot be affected by the traumas of the external world.”

I get called ‘Sadist’ often for my indulgence in dark humour, but what can I say? Edgy humour like this warms my cold rock of a heart. Who am I kidding? I don’t have a heart. When you’re dead from the inside, not much offends you.

An interesting observation in one of my sources was the fact that distance and time play an important role in dark humour.

“Distance determines the extent of violation. Tragedies seem to be tragic depending on how physically far away they occur, whereas mishaps seem to be funnier when they are physically closer. The brain also processes distance psychologically in terms of time. Comedian Gilbert Gottfried was publicly hissed at for joking that he was taking a flight that would make a stop at the Empire State Building just after 9/11 occurred.

Jokes about such tragedies can be deemed “too soon” when made just after the tragedy occurs. For instance, however unethical, people find Holocaust jokes funny, not only due to their faraway physical distance, but also due to their temporal distance, in other words, due to how much time has occurred since the Holocaust. Other than temporal distance, a violation can seem more distant if the butt of a joke is someone else; this is called social distance. Or, the violation is in the form of hypothetical or imagined scenarios, such as in Looney Tunes, when a character falls off a cliff. This is funny because we know it’s not real.”

Although I said I don’t take studies that claim dark humour is linked to higher IQ, I can see why they say that. Take this example:

For most people, they couldn’t think of what this image is trying to say. If you’re one of those normies, it’s trying to say “Tigger on the Nigger”. Horrific, I know. I love it. You’ll see that understanding dark humour actually takes some thought process, and that’s why you need to be clever to understand it.
At the end of the day, there are no definitive ways to categorize or study dark humour or humour in general. Psychology takes a lot of research into the area and gets pretty close, but like I said before, nobody’s yet been able to generalize a formula for what’s funny to everyone and what isn’t.

In simple words, dark humour needs a very laid back and easy-going attitude in order to enjoy it, otherwise being too uptight will just offend you. As with anything, it’s not going to be enjoyable to everyone. If you’re anything like me, you may accidentally offend someone. The timing and audience matter a lot. If you’re with conservative folk, it’s best to save up that hilarious ‘Jew in the oven’ joke for later.
As always, thanks for reading.

One thought on “The Science of Dark Humour | Hri-write”